The British Egyptian Society is delighted to announce

the winner of the Peter Mackenzie Smith Book Prize is

The Buried: Life, Death and Revolution in Egypt by Peter Hessler.

The society was honoured to introduce His Excellency, the Egyptian Ambassador to the Court of St. James, Mr Sherif Kamel and Mrs Heba Ismail,

To remind you of the criteria, the judges and the books that made the short list please kindly see below:

The criteria The Prize is for the book that best improves understanding of Egypt. Particular consideration will be given to books attracting a wide readership in the English speaking world. In awarding the Prize, the judges will assess how well the book enhances the understanding of Egypt to a wider audience but will consider the book’s originality, clarity and accessibility and its importance to the field for which it is written.

Dr. Omniya Abdel Barr from the Victoria and Albert Museum.

The judges were unsure how many entries this new prize would attract and were gratified that so many were nominated, making it extraordinarily difficult to produce a short list. Some outstanding books did not make the short list not because of any lack of quality or scholarship but because of the priority given to how well a book would attract a readership in the English speaking world and enhance an understanding of Egypt. The judges were particularly impressed with Religion in the Egyptian Novel by Christina Phillips  published by Edinburgh,   Egypt 1919: The Revolution in Literature and Film in the Twentieth Century by Dina Heshmat, also published by Edinburgh, and Rediscovering the Egyptian Classics: How Editors and Print Culture Transformed an Intellectual Tradition by Ahmed El Shamsy, published by Princeton University Press but, like a few  other entries, felt that these books would require a good knowledge of the work of Egyptian novelists and intellectuals, some of which has not been translated into English. We also very much enjoyed reading  Egyptomaniacs:  how we became obsessed with Ancient Egypt  by Nicki Nielsen   published by Pen and Sword Books. Britain in Egypt: Egyptian Nationalism and Imperial Strategy, 1919- 1931 by Jayne Gifford published by  Bloomsbury is a great book for the British Egyptian Society members interested in this period but it was too focused on the British position to get into the short list.

Sufism in Ottoman Egypt : circulation, renewal and authority in seventeenth and eighteenth Centuries by Rachida Chih published by Routledge.

Rachida Chih has written a remarkable book that looks at the emergence and spread of Sufism in Ottoman Egypt and its lasting influence in Egypt and beyond. She investigates  the role of professors at  Al-Azhar in initiating students into Sufi Orders  at  a time  when Cairo was a major centre of learning bringing together “the exoteric and esoteric sciences.” Her book  examines the lives and teachings of Sufis such as Muhammad bin Halim al-Hifni, who was born penniless in a village in the Delta but was able pursue religious studies at Al Azhar and become a scholar of great authority not in Egypt and the Ottoman Empire. In analysing the doctrinal foundations, the social implications and the political effects of Sufi authority, she shows the central role of Egypt in circulating and transmitting Sufism.

The author has an evident command of the sources and writes fluidly in a style that makes this book accessible to non-specialists. Her short book of 170 pages has attracted wide praise. The judges concluded it was just too narrow in terms of content and period covered to attract a wide readership in the English speaking world. Nevertheless , we commend Dr Chih for her pioneering research and for producing a book whose importance has been recognised by her peers and will endure.

In complete contrast, Charlotte Booth has written a guidebook for a new arrival planning to settle in Thebes in 1360 BCE, based on How to Survive guides and covering matters such as basic essentials such as food, drink, clothing,  housing and recreation whilst also covering religious practices, ailments and cures and history as seen at the time. Her book written in  the straightforward style of a guidebook or self-help book  with inserts and  boxes to illustrate, explain and elaborate on significant facts. She gave herself a challenging task that might easily have gone wrong, but she succeeds splendidly in making her chosen format into such a readable, enjoyable – and informative – book.

What makes this book so impressive is the way author skilfully engages the imagination of her readers and  uses her profound knowledge and a lifetime of scholarship to paint a vivid and comprehensible picture of the reality of life in ancient Thebes not just of the elite but of ordinary people. There is a fascinating section in how to step out in style in 1360 BCE. It is a remarkably accessible way of writing history. Charlotte Booth is to be congratulated for producing such an original work and for writing  a book that each  judge would want to have on his or her  shelves.

Cairo since 1900: an architectural guide by Mohamed Elshahed published by the American University in Cairo Press.

Cairo since 1900 is a long-needed book that looks at the architecture of Cairo since the beginning of the twentieth century with concise explanations of the styles used and how buildings changed over time. There is a detailed survey with photographs and plans and histories of the most important buildings and the ideas that inspired  the architects and their patrons. The author  examines how architectural styles in Cairo were influenced by both Egyptian and international modernist ideas. As one reviewer put it “this guide is a revelation and will help, thanks to its clarity and precision, both locals and visitors to discover the astonishing buildings which have crystallized the modernization of Egypt’s capital.”

This unique book fills an important gap   in our knowledge of twentieth century Cairo  and will be read for years because of the scale of its achievements, excellent photographs, profound scholarship and meticulous research – clearly a labour of love by Mohamed Elshahed, an author who also wants to stimulate greater efforts to preserve Cairo’s modernist  architectural heritage. This  unique, accessible guide and reference book will be of long-lasting interest. There is nothing else on Cairo like it available in English.

Egyptologist Notebooks by Chris Naunton published by Thames and Hudson

Chris Naunton, himself a leading Egyptologist, has researched the contributions of  Egyptologists, explorers and travellers of previous generations to reveal how since the sixteenth century each contributed to our knowledge of ancient Egypt. The  source material are the notebooks, drawings, maps, site plans and copies of hieroglyphs  as recorded at the time by  the Egyptologists and their assistants. Dr Naunton reveals how our understanding of Egyptian history evolved over time and how explorers and archaeologists often built on the work of their predecessors. It is an elegantly written, accessible and authoritative work. There is a wealth of information – clearly presented in this book. The judges agreed this reviewer summed it up well:

“Dr. Naunton offers an illuminating series of brief biographies, covering five centuries, based on travellers’ diaries, letters, and notes. Some, such as Giovanni Belzoni, Howard Carter, and Amelia Edwards, are names familiar beyond Egyptology, but many, such as Jean-Jacques Rifaud, are known only to the cognoscenti. Each is beautifully illustrated with portraits and evocative sketches – often in full-page colour reproductions – ranging from pyramids, temples, statues, paintings, and mummies to period maps, technical drawings, and hieroglyphic writings, drawn either by the travellers or their contemporaries.”

This remarkable book is one that readers already well versed in Egypt will enjoy and those new to Egypt will find indispensable.

Modern Art in Egypt: Identity and Independence,1850-1936 by Fateen Mostafa Kanafani published by I B Tauris.

Modern Art in Egypt is a brilliant book that examines the history of fine art in Egypt before describing and analysing the modern art movements from the mid nineteenth century (and the historical background) through following the ideas and styles  that emerged, the patronage provided by wealthy individuals and later the state  and the role of external, especially European, influences. The author provides an outstanding introduction to Egyptian cultural life and shows how the artists were influenced by political developments of the nationalist and anti-colonialist movements  whilst also absorbing the ideas and styles of the French and Italian artists teaching them in Egypt and abroad. In the second half of the book is a discussion and analysis of the most influential and successful Egyptian artists of the 20th century. It introduces these artists, who are often better known in France, to the English-speaking world with excellent illustrations of their paintings and sculptures.

The judges want to make a special commendation of Modern Art in Egypt as it does much more than the title suggests. In introducing the reader to the Egyptian contribution to modern art, the author has written one of the best introductions to modern art that is available. This is an important, original, well researched, beautifully written and accessible publication that is likely to be of long lasting significance.

The Buried: Life, Death and Revolution in Egypt by Peter Hessler. Published by Profile Books

Peter Hessler’s  wonderful book describes and analyses Egypt as the country and its people  experienced the Arab Spring and its aftermath. He illustrates the historical continuity by skilfully interweaving his narrative of this turbulent period with life under the Pharaohs and the work of contemporary archaeologists. In focusing on the lives of individuals the book reveals how apparently seismic political events often have only limited impact on people dealing with the travails of everyday life – just as their ancestors had been doing for millennia. Written by a skilled journalist with an eye for the appropriate anecdote and  an understanding of the layers of society going back to the days of Akhenaten the book gives the reader a wonderful evocation of an Egypt in the twenty first century and of how Egyptians cope with what life throws at them. The style is always interesting and is never condescending and the story telling holds the reader’s  attention throughout.

It brings life in Egypt to the English speaking world. Its brilliant writing and storytelling  engage the reader and hold his or her attention from start to finish. The book has already been widely read and has attracted praise from  numerous reviewers. It is original and accessible and a delight to read.

The judges found it extraordinary difficult to select the winner. But we were unanimous in agreeing that the book that best met the criteria for the prize was The Buried. It a worthy recipient of the first Peter Mackenzie-Smith Book Prize – and I think one that Peter Mackenzie Smith would have particularly enjoyed. 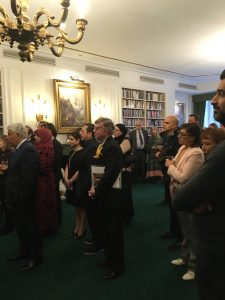 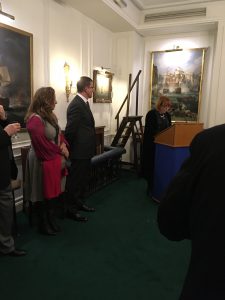 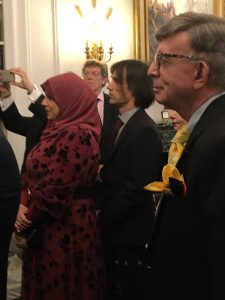 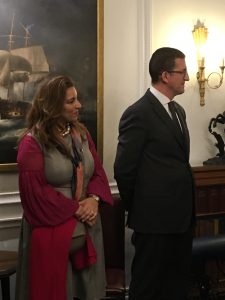 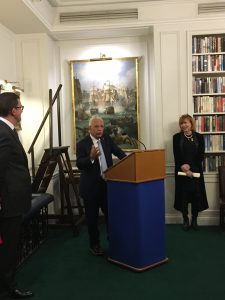