In its annular joint film event the Egyptian Cultural and Educational Bureau (ECEB) and the British Egyptian Society (BES) are proud to announce the screening of the modern classic romantic comedy ‘Girls love’ celebrating 15 years since its release. The film screening will be followed by a panel discussion with the film director Khaled El Hagar in conversation with Dr Gamal Hassan (consultant psychiatrist and book author) and Dr Khalid Ali (consultant geriatrician and film critic) exploring the theme of women stories in contemporary Egypt.

‘Girls love’ is a charming story of three half-sisters, Nada, Ghada and Roghaya, forced to live together to fulfil their late father’s wish of ‘bonding under one roof’ before they can divide their inheritance. The enforced proximity brings to the surface the sisters’ emotional turmoil and vulnerability as each of them struggles to find ‘Mr Right’. Their male neighbor, Dr Moheeb, offers expert advice as a consultant psychiatrist, stating ‘’Love is the underlying cause for all forms of mental illness’’. Dr Moheeb is none the wiser when it comes to ‘matters of the heart’ as he falls in love with each of the sisters in turn. Boasting a stellar cast of Egyptian stars, Leila Elwy, Ahmed Izz, Hanan Turk, Sawsan Badr and Ashraf Abdel Baghy, ‘Girls love’ remains a much-loved film gem.

Khaled El Hagar is a multi-award winning director and writer with the wit and diversity of Woody Allen, the sensitive but quirky flare of Pedro Almodovar and social observation approach of Mike Leigh. After acquiring a degree in law from Cairo University in 1987, he changed career to become an assistant director to Youssef Chahine. Khaled then formally studied ‘Directing and script writing’ in the UK. After making few short films, El Hagar’s directed his first feature film ‘Small dreams’ in 1993. El Hagar is a versatile director having made films in several genres including musicals, romantic comedies and hard hitting social dramas, and four acclaimed TV series. ‘Al Shookh- Lust’ (2011) received the best film award in Cairo International Film Festival (CIFF) in 2011 and was Egypt’s submission to the Oscars. 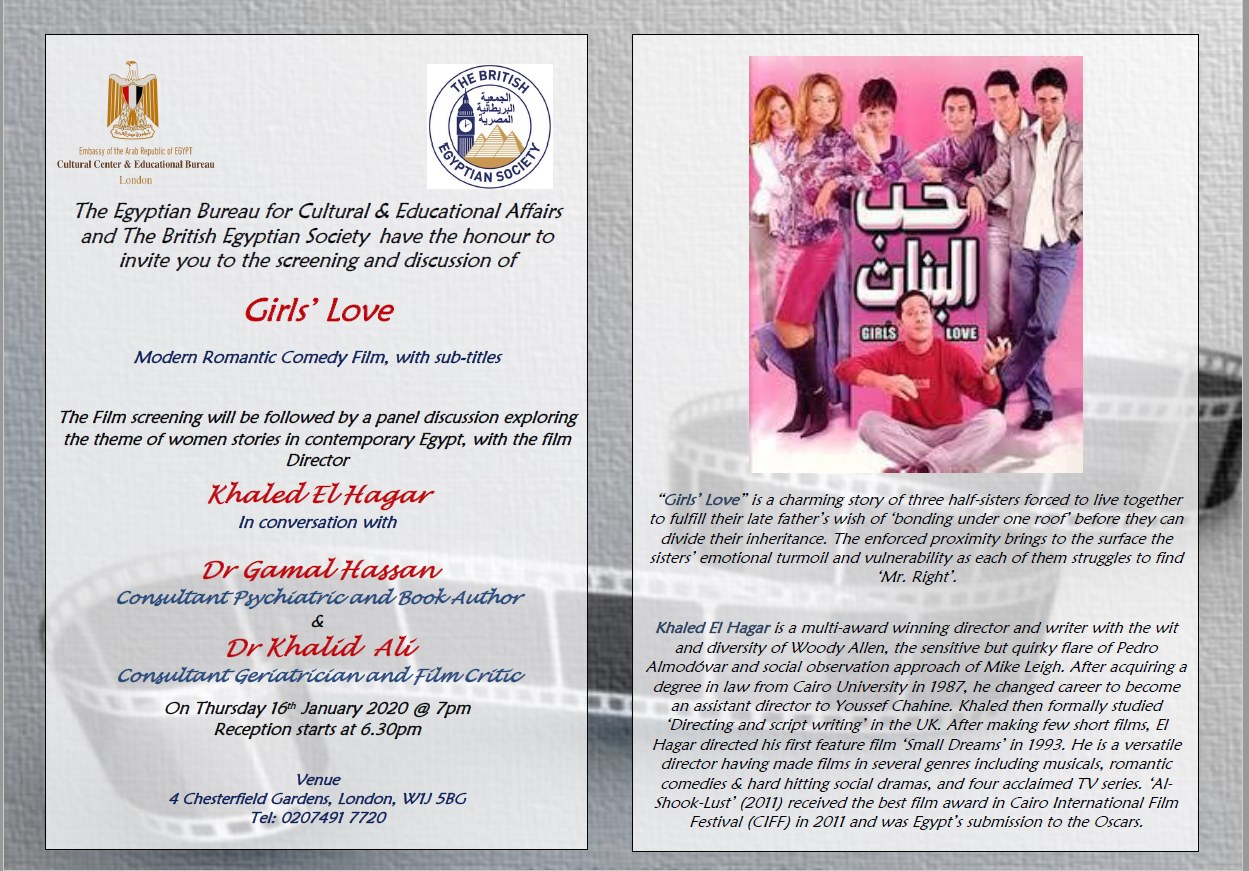